This past weekend was Pride weekend for Columbus. The official grand marshall of the pride parade was our own Nina West fresh off of winning Miss Congeniality on Drag Race Season 11. Nina has been such a shining example of what Columbus is, and the inclusivity of the Columbus drag scene, especially in the West family. I attended the Best of Axis II recently at Axis Night Club, and Virginia West (Nina’s Drag Mother) revealed that in the West family they have performers who are Gay, Lesbian, Transgender, Straight, Poly, and more which is part of what makes them amazing.

It is estimated that half a million people were in Columbus this weekend to watch the parade and attend pride. My husband and I walked in the parade with Planned Parenthood. I met a lovely Columberino (Columbus My Favorite Murder fan) who was also walking with PP. Virginia West, who was the parade emcee, was so passionate and ebullient when we reached the judges that it legitimately made me a little weepy. “Women’s Rights are Human Rights” and the crowd went nuts. The cheering as we walked was uplifting. On another note, my employer had an amazing turn out as well with over 400 walkers including our CEO. I later found out that Planned Parenthood won the award for Best Non-Profit Contingent.

On Sunday, Geek Girl Brunch Columbus had a brunch/lunch outing to Bat n Rouge Baseball. Local celebrities and local lgbt advocates dress in drag and play a game of baseball/softball. I had never been and it was seriously fun though one of our members got really bad sunburn on her legs. There were people dressed as: Liza Minelli, Nina West, Chyna, Doris Day, Snow White and the Seven Dwarves, Game of Thrones characters, Real Housewives, and more. It was a great time. 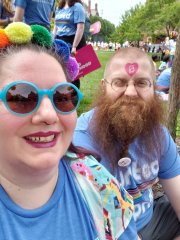 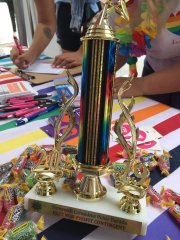 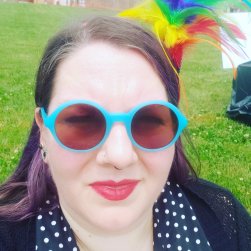