Playing on Amazon Prime one day I found the movie Earth Girls are Easy, a particular favorite of mine from when I was younger. If you are unfamiliar with this particular film it centers around Gina Davis’ character Valerie and what happens when an alien ship crash lands in her pool. The furry aliens are shaved and reveal themselves to be Jim Carrey, Damon Wayans and Jeff Goldblum. Valerie is just trying to keep them “safe” while waiting for her pool to be drained by a surfer dude named Woody, played by Michael McKean. There is sex, weird super feel good touching, dance battles, musical sequences and eventually a happy and slightly bizzare ending.

I thoroughly enjoyed my latest watching of this film and was conveying as much to my sister-in-law, Niki, when she mentioned a movie she remembered from the eighties with Jeff Goldblum and Cyndi Lauper. I am a movie buff and was shocked that I had no knowledge of this film. Niki recalled that the movie was called Vibes. Well it wasn’t on streaming anywhere, but I found a copy of the dvd for sale on Amazon, so I ordered it.

Vibes is about a couple of psychics, Goldblum and Lauper, being used to recover some kind of treasure in South America by Peter Falk. Lauper plays a woman who channels a spirit which tells her important things, and Goldblum is a man who can touch an object and tell you where it has been. Overall the movie is an entertaining romp, and Lauper is ADORABLE in it. I wanted 90% of her clothing, and enjoyed her performance so much. 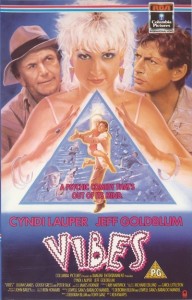 Then yesterday I decided to hop into yet another 80s film with Desperately Seeking Susan, a film I know I watched as a kid but that left no impression except that Madonna is cool. Rewatching it I thoroughly enjoyed the punk aesthetic, and the mistaken identity/ amnesia story. Roberta’s husband was appealingly skeezy, Roberta adorably naive, Dez (played by Aiden Quinn much to my delight) charmingly frustrated, and Susan breezily chill and confident. I genuinely enjoyed watching it again for the first time, since I had forgotten everything but the fact that it starred Madonna.

More than anything, though, I am in love with the style of the female characters in these films. My freak/punk/goth heart swelled at the fishnet, petticoats, lace, boots, ornate jackets and leather. It sent me down a rabbit hole on Pinterest. Are there any other 80s movies I should revisit? Let me know in the comments.

Here are some images of amazing styles from the three films. 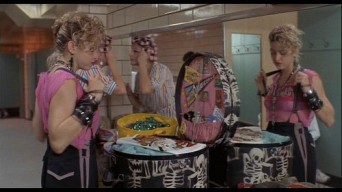 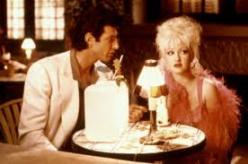