And on the forums at wench.org I met many new wonderful women from all over who were from all walks of life. Including my lovely friends Gellis Indigo (Jean) and Grace (Sarah). In 2006 I worked for a booth at the Ohio Renaissance Festival for several weeks with a coworker, and Gellis and Grace came by to meet me in person with Gellis’ rogue husband Kyas (Pete). This photo is of the three of us a couple of years after this first meeting.

As time would go on Jean and Sarah would become the Madame and Vice-Madame of IWG 57 which was the local for Michigan, Ohio and Indiana. We would travel together to Michigan to be with our fellow Local 57 wenches because Ohio Renaissance Festival at the time was not open to an active Wenches Guild presence. We had fun, but there was always the underlying feeling that we were outsiders. We tried to get unofficial wench events together at home but never got the response we would have liked. 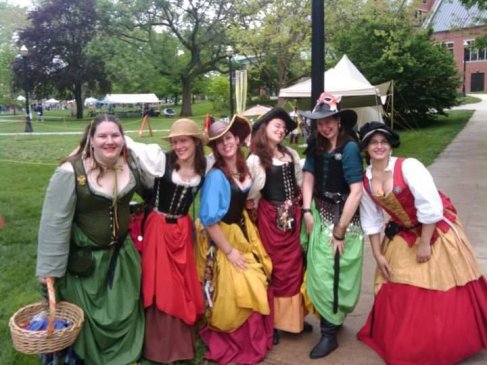 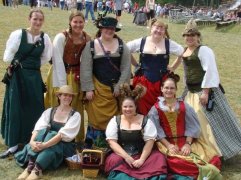 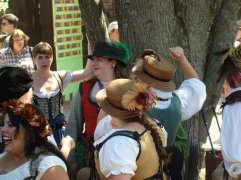 Fast forward to 2018 when my friend and fellow wench Susan says to me that she would like like to start an Ohio Local for the IWG. I agree and the two of us set out on a mission to create an Ohio local and to get permission from the Ohio Renaissance Festival to be part of faire. We met with some resistance from our formal local, but eventually we were granted the designation of IWG Local 73 – The Wenches of Myth. We got our official status just before opening day 2018. After our first vote I would be voted Madame, Sarah would be Vice Madame and Susan would be our Arbiter.

The 2018 season at Ohio Renaissance was spent networking, meeting wenches, and finding out how to get our official status.

In Spring of 2018 Susan and I had a meeting with the entertainment director of ORF. We talked about our vision for the wenches at ORF. It ended with us feeling really positive that we were going to get the blessing to be part of Faire. The official word came in July, we would be welcome at ORF. The first official Ohio local would be an official part of the festival.

Sarah, Susan and I began plotting and planning. We came up with ideas for games and events. I came up with the idea for a game that would end up being called wench collecting. We would have a meet up to decorate our Collect Me pins.

Since the beginning of ORF labor day weekend we have given 3 toasts in pub sing, walked in several parades, played wench collecting twice and had 5 new wenches join with promises of many more. We are beyond proud of how successful our first season has been and hopeful for many many more! 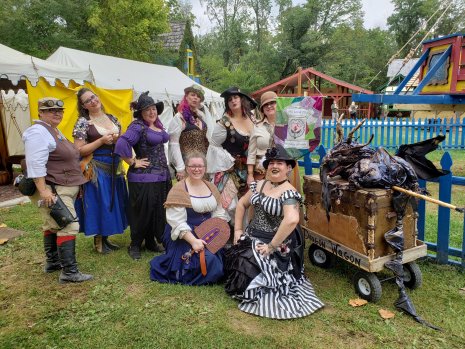 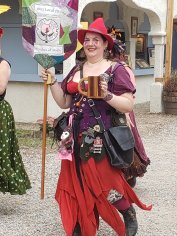 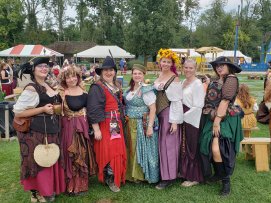