I have a confession to make; I am a theatre geek. I lettered in drama in high school. I was active in my schools drama club as well as many local community theatre programs. I had been a singer since I was a little girl, but I didn’t find acting until I was in sixth grade and they announced auditions for “Reader’s Theatre”.

The idea of “Reader’s Theatre” was that high school drama club members would direct us in a presentation of a play that would be performed seated with a stand in front of us so all of the acting would be through voice modulation. In sixth grade I auditioned with several of my friends, and I was delighted when I realized I knew one of the directors as he was a friend of my cousin. I was accepted and found myself playing girl 1 in the first short “We Wanted a Hill” and Spring in another play who’s name I cannot remember. I was so excited and after performing I was one of our cast to be rewarded as All Star Cast.

I would do “Reader’s Theatre” for seventh and eighth grade as well. And I made All Star Cast both years. I played the Very Odd Mother in Cinderella Wore Combat Boots and The Evil Stepsister in another version of Cinderella. I can’t remember the title, but I know that one of my lines was to call Cinderella a “strumpety hussy.”

I continued in drama throughout high school, and started working in community theatre. Some of my “acting credits” include Hodel in Fiddler on the Roof, Laury in Oklahoma, Ermengarde in Hello Dolly, Betsy in Godspell and countless chorus roles in The Wizard of Oz, Cabaret, Jesus Christ Superstar, The Green Heart and Once Upon a Mattress. I also did the occassional straight play, but my love was musicals. 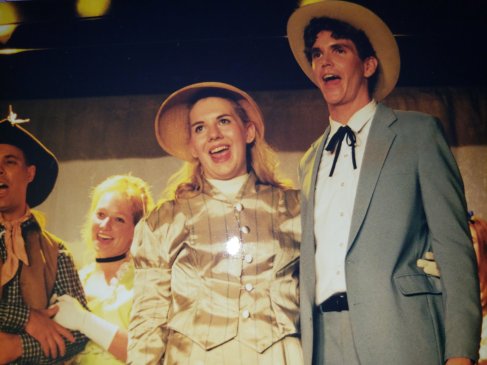 When I graduated from high school my original plan was to go to college for Musical Theatre, but life just didn’t work out that way. After a while I stopped doing community theatre due to one thing or another, and now it has been more than 15 years since I did a show. Sometimes I miss it so badly that my heart aches, especially when I see a particularly beautiful show. I still miss the warmth of stage lights, and the feeling when you really connect with an audience.

Why am I telling you this? Well, I actually don’t know other than I compulsively requested 11 musical soundtracks from the library this week: Assassins, Waitress, Once on This Island, Mean Girls, Legally Blonde, Hairspray, Anastasia, Dear Evan Hansen, The Band’s Visit, Rocky Horror Show, and The Mystery of Edwin Drood. Maybe if I sing and dance around my house enough I can relocate the feeling I used to get. I can at least have fun trying.

One thought on “Thank You For The Musicals”

Follow I Am The Weird Girl on WordPress.com
Join 240 other followers